RF Lenses vs EF Lenses: What's the Difference and How to Decide?

Four years since the EOS R mirrorless system debuted, the RF lens lineup has grown tremendously. As of August 2022, 32 RF lenses have been released, covering an ultra-wide-angle 14mm to a super telephoto 1200mm. With a mount adapter, EOS R system users can also use any of over 180 EF mount lenses that were released throughout the film and DSLR camera eras. How are RF and EF lenses different? With older EF lenses often cheaper than RF lenses of the same class, are RF lenses really the better investment? Read on to find out, and get some ideas for building the lens collection that works best for you. 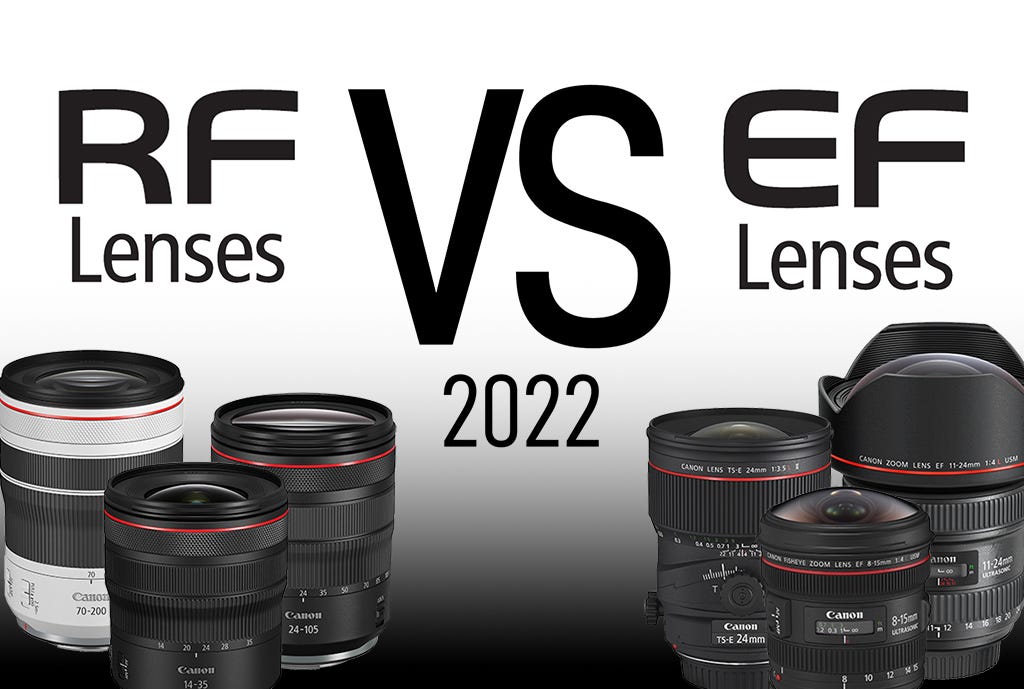 Debuting in 1987, the EF mount was designed to be future-proof for at least 30 years. But how about the next 30?

The EF mount debuted in 1987. As the first completely electronic mount that didn’t require any mechanical link between the lens and camera body, it was a gamechanger developed with the next 30 years in mind. And that shows in its cross-compatibility. You can use an EF lens released 30 years ago on a recent camera body, and it would still work well with very few functional limitations.

But it’s been over 30 years, and camera technology has improved tremendously. To take full advantage of the newest technologies, it was necessary to develop a new mount that could remain relevant for the next 30 years. This was the motivation behind the RF mount, which was developed alongside the EOS R mirrorless system with three qualities in mind:

What is it and why does it matter?

EF lenses
The EF mount system was designed for SLR cameras, which have a mirror in front of the image sensor. There needs to be space for this mirror to move up and down, which means the back focus distance of EF lenses cannot be too short. This design restriction makes it harder to optimise EF lenses for image quality.

RF lenses
The RF mount system is designed for mirrorless cameras, so it doesn’t need to leave space for mirror movement. This means more lens design flexibility, making it easier to adopt a lens configuration that optimises image quality.

The RF mount has a flange back distance of 20mm, but RF lenses can be designed with a back focus distance shorter than 20mm. 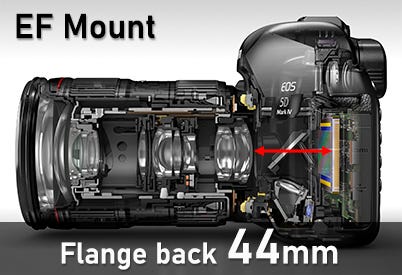 To avoid blocking mirror movement, EF lenses must have a back focus distance of at least 44mm. 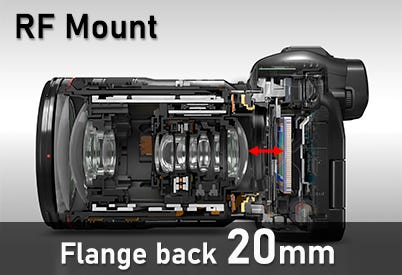 RF lenses can be designed with a back focus distance that is shorter than the 20mm flange back distance. 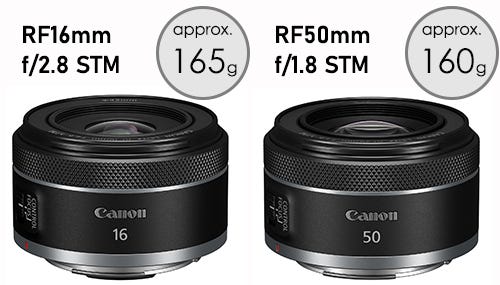 Large aperture and wide-angle lenses benefit the most from the RF mount. One example is the RF16mm f/2.8 STM, which would otherwise be much larger and heavier.

So good it didn’t need to be changed!

The RF and EF mounts have the same 54mm mount diameter. A larger mount diameter makes it possible to use a larger lens element for the rearmost lens. This ensures that light bends less before it reaches the image sensor, therefore reducing lens aberrations.

Although the EF mount was designed over 30 years ago, the EOS R system engineers decided it was good enough, and adopted the same mount diameter for the RF mount.

The RF mount has 12 electronic connection pins, 4 more than the 8 pins on EF lenses. These, together with an improved transmission protocol, allow faster communication between the lens and camera body compared to EF lenses. Information on focusing, zooming, aperture, image stabilisation, and various lens aberrations are swiftly sent to the camera, allowing more sophisticated control.

All this information from the lens is among the tremendous amount of data processed by the DIGIC image processing engine.

Better control when you shoot

RF lenses have an electronic control ring and focus ring. On some lenses, they are combined.

On the electronic focus ring, you can customise operations such as:
- The rotation direction: Especially useful for those switching from another camera system who are used to turning the ring in the reverse direction
- The MF focus ring sensitivity: To something that feels the most intuitive to you during precise manual focusing. 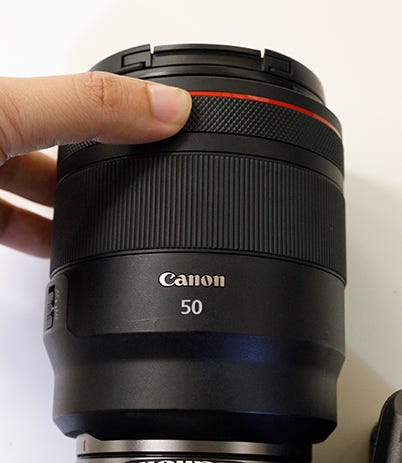 You can assign the control ring to control aperture, shutter speed, ISO speed, exposure compensation, or depending on your camera model, even the white balance, Picture Style, and AF mode. It’s also possible to change the control ring’s rotation direction.

TL;DR: RF lenses are designed for the future. They offer better functionality and control than the EF lenses, and you can also expect better optical quality than EF lenses of the same class. With more design flexibility, RF lenses are also mostly smaller and lighter than equivalent EF lenses.

The most cost-efficient lenses can be used even if you upgrade your camera. But it depends on what kind of upgrade!

i) Between EOS DSLRs and the EOS R system: EF lenses

EF and EF-S lenses don’t just fit on EOS DSLR cameras, they can also be used on the EOS R and EOS M system cameras with the appropriate mount adapter. This makes them a very cost-efficient solution if you’re on a budget, or still concurrently using an EOS DSLR/EOS M series camera. 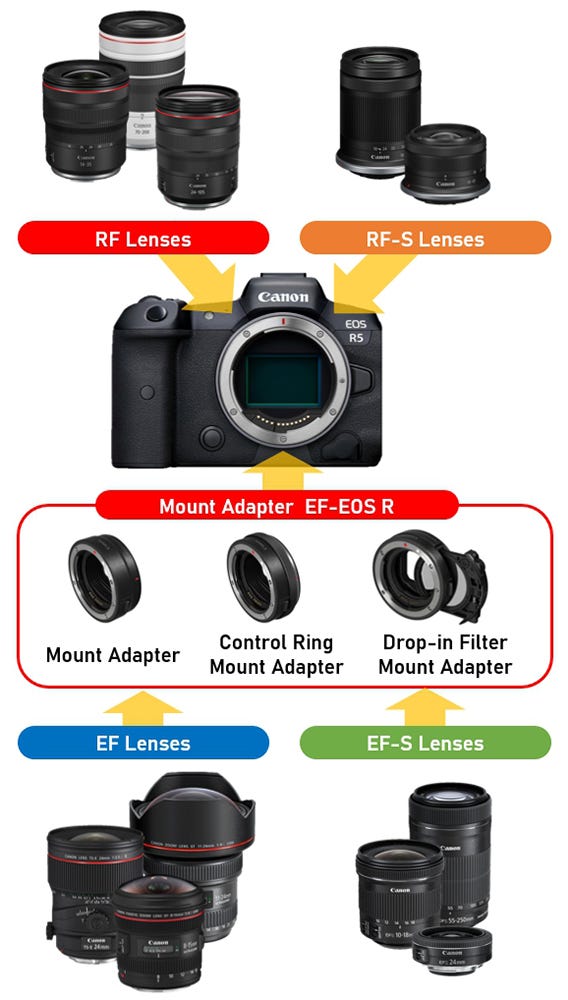 Caveat: A mount adapter adds a few centimetres and some extra weight. While this shouldn’t feel significant on most camera-lens combinations, it could cause some lenses intended for compactness (such as 50mm f/1.8 lenses) to protrude slightly more than desired. For the most compact combination, choose an RF lens. 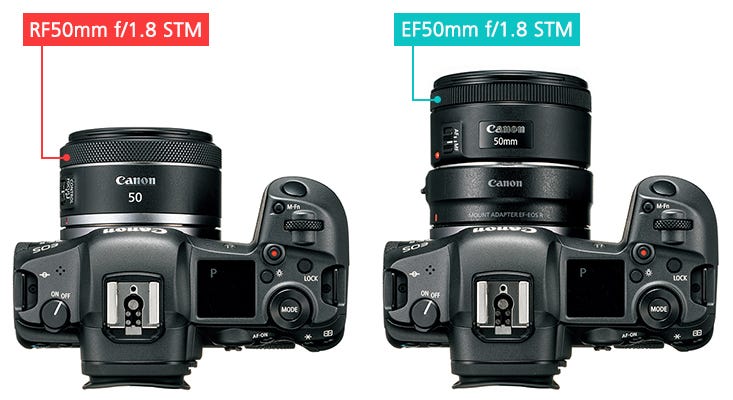 If you use an APS-C EOS camera, you probably already own EF-S/RF-S lenses, which are designed for the smaller APS-C sensor. It’s important to know that:

When you attach EF-S or RF-S lenses to a full-frame EOS R system camera, the camera automatically switches to the 1.6x crop mode, providing the same field of view as an APS-C camera. This is reflected in the viewfinder/Live View image. 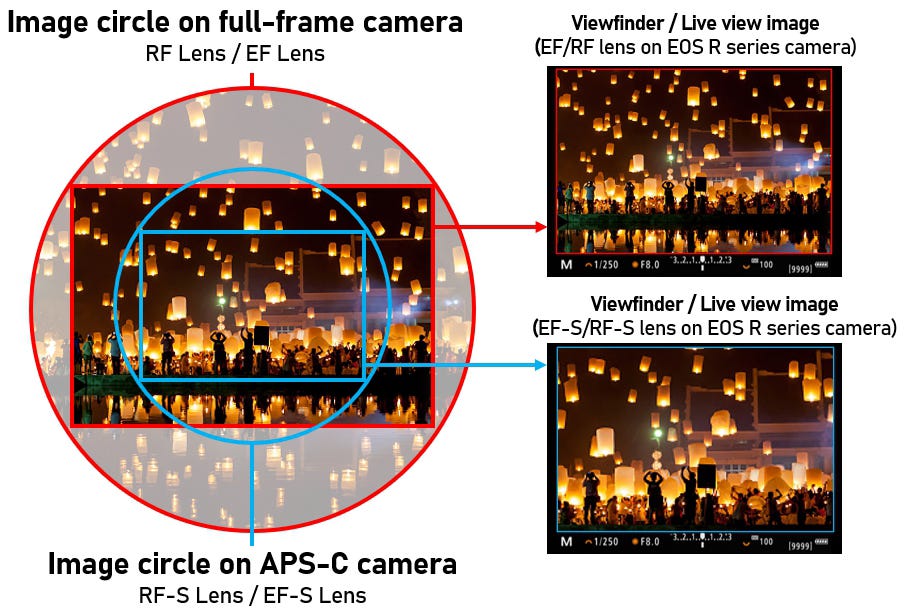 Of course, you can also future-proof your gear by getting RF lenses.

If the following functions are important to you and what you shoot, it’s best to go for an RF lens: 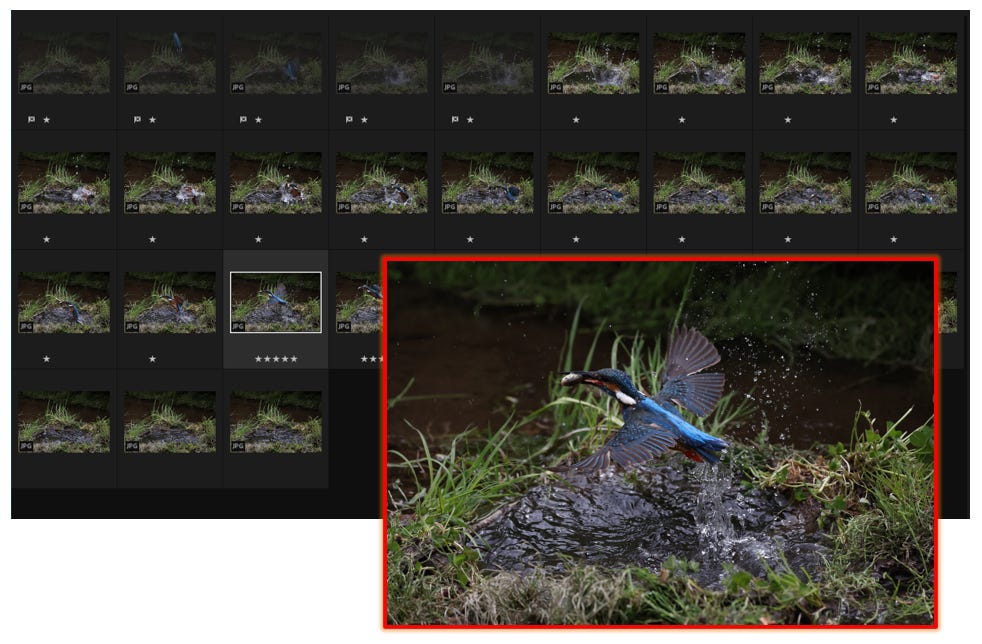 Know this: On EOS DSLR cameras, image stabilisation is only available if you use an EF lens with Optical IS. However, EOS R system cameras with In-Body IS will stabilise images even if you are using RF/EF lenses with no Optical IS.

If you often use screw-on polarising (PL) filters or neutral density (ND) filters, you probably have multiple different-sized filters to fit lenses with different filter diameters. Some lenses such as the EF8-15mm f/4L Fisheye USM and EF11-24mm f/4L USM also can’t take screw-on filters due to their protruding front element.

The Drop-In Filter Mount Adapter EF-EOS R is a nifty solution to both issues. Just insert the appropriate filter, and you can use it with any EF lens—even those that don’t support screw-on filters.

On the Drop-In Variable ND Filter (ND3 - ND500), turning a dial adjusts the light reduction effect between 1.5 to 9 stops. It’s also useful for video shooting, such as when you want to use a wide aperture to achieve shallow focus effects on a sunny day! 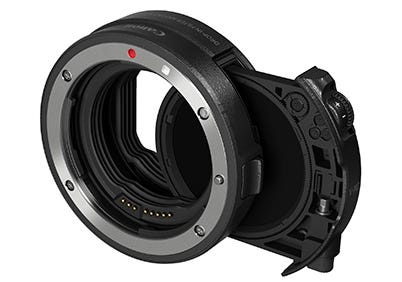 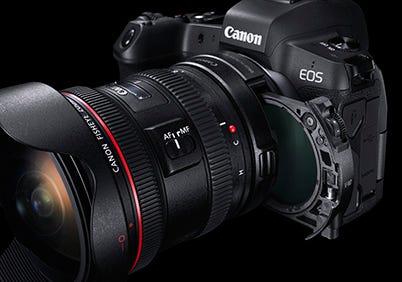 Consideration #5: Do you need a specific type of lens?

Some lenses are unique to one mount…for now

The EF system has been around for over 30 years, which is why it has the richer lineup. There are over 180 EF lenses, compared to 32 RF lenses as of July 2022! There are also some special lenses with no existing RF versions, such as tilt-shift lenses, fisheye lenses, and the MP-E65mm f/2.8 1-5X Macro Photo.

However, the RF lens lineup also has unique lenses with no EF equivalent, such as the RF5.2mm f/2.8L Dual Fisheye, which is used with the EOS R5 or EOS R5 C to shoot VR video.

The list that follows shows all RF lenses available as of July 2022 on the left. The key EF lenses released relatively recently are on the right, and we’ve listed the RF equivalents beside it where available. Between an EF lens and its RF counterpart, the RF lens is the better investment.

■ No longer in production

Consideration #6: Do you shoot faraway subjects?

As you may have noticed from the table above, in the EF lineup, only the L-series telephoto lenses support extenders (teleconverters), and even then, AF functionality might be limited. Meanwhile, in the RF lens lineup, there are budget-friendly non-L super telephoto lenses that support extender use. And if you are out to get the longest reach possible, there is the RF1200mm f/8L IS USM. When combined with the Extender RF2x, it takes you up to 2400mm—complete with AF support. 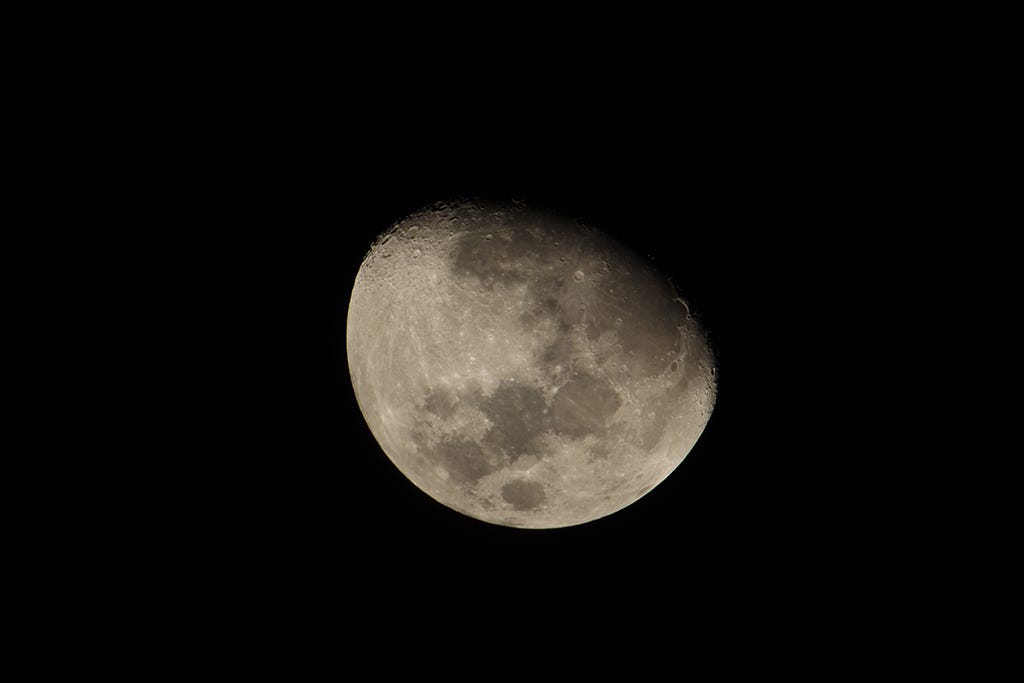 Use the Extender RF2x with the relatively inexpensive RF800mm f/11 IS STM to shoot at 1600mm—enough to capture the details of the moon close-up without cropping,

It’s safe to say that overall, RF lenses are a better investment than EF lenses. They reap the benefits of the RF mount, and are designed to bring out the best in current and future EOS R system cameras.

- If you don’t already own the EF version of a lens:
It’s best to get RF lenses.

- If you already own the EF version:
Switch to the RF version if...
- You need the best speed and AF performance. Tip: Telephoto RF lenses, in particular, can provide better AF and continuous shooting performance than EF lenses.
- You want maximum IS capability.
- You need a compact, lightweight combination.
However, if these don’t matter to you, you can continue to use your EF/EF-S lenses with a mount adapter.