Visiting Singapore and looking for a place that’s full of local flavour as well as interesting architecture? Try Tiong Bahru. Dating back to the 1920s, the Tiong Bahru neighbourhood is one of Singapore’s oldest public housing districts, and also home to an eclectic mix of new high-rise apartments, old low-rise pre-war flats, and heritage shophouses. Long-time resident and architectural photographer Finbarr Fallon (@fin.barr) takes us on a mini-tour, and shares with us some sites to photograph. (Photos and text by: Finbarr Fallon) 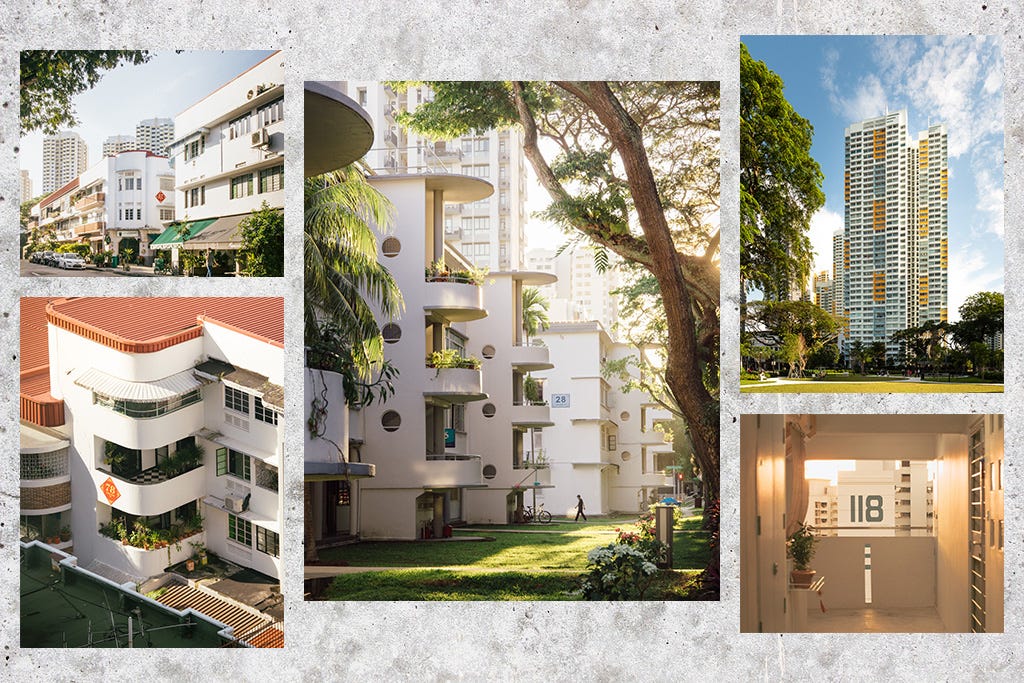 Tiong Bahru: An intriguing sense of scale and mix of perspectives

I’ve called Tiong Bahru ‘home’ for years, and what I love about it is how the area holds together diverse spacetimes. Old, low-rise pre-war buildings are juxtaposed against new high-rise apartments, and although both types of buildings are residential, they are very different in origin and appearance.

The encapsulating power of Tiong Bahru can also be seen in how people’s daily routines play out across the area. Walking along the covered walkways at the pre-war buildings on a sunny morning, there aren’t many people and the long, low rays of early morning are slowly unfurling. The golden stillness is very peaceful, almost magical. But once you turn the corner towards the market, the scene becomes frenetic and intensely vibrant, with crowds of people of all ages toting their plastic bags in one hand and fresh blooms in another, and the smell of fresh hot cooked food mingling, wafting from upstairs.

It is this particular mix of high-low density and intensity that I love. It feels very unique to the area and creates an intriguing sense of scales and mix of perspectives. While landed residential property neighbourhoods have a similarly low-density feel, as the low-rise residential buildings in Tiong Bahru are multi-unit dwellings, it retains a strong feeling of communal living.

Walking down Tiong Bahru Road eastward from Tiong Bahru MRT station, your first sight of the unique architecture of the area will probably be the walk-up flats numbered Block 17 to 50, including the ones in the image below. 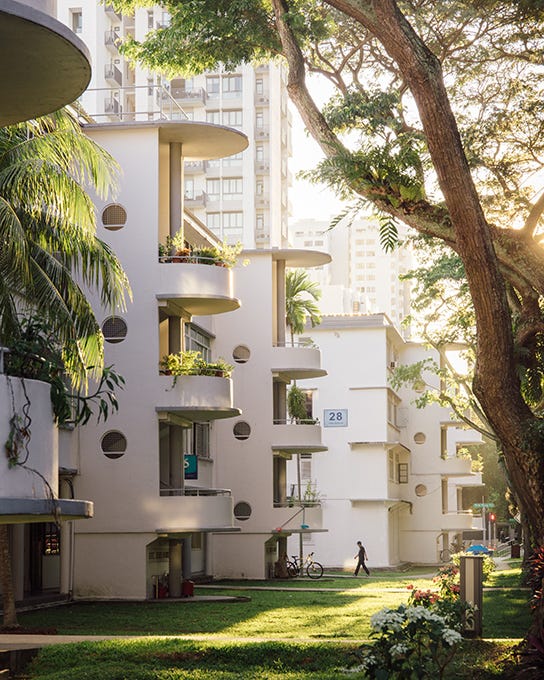 The portholes and curved exteriors of the external stairwells pictured above may resemble those on the older Art Deco buildings in the same area, which we will see later, but these details were added in to soften the forms as opposed to more typical orthogonal blocks of the time.

At sunset, the light shines directly West along the length of Tiong Bahru Road, which creates good opportunities for shooting along the green areas surrounding the residential blocks.

The light is softer and warmer during golden hour, and you can leverage the long shadows for dramatic effect.

The mature trees interspersed with the buildings add visual texture. Shooting towards the sun, with low sunlight filtering between trees, one can achieve an almost painterly glow. I consciously waited for a single person to walk through the frame, which lends a sense of scale to the architecture. They appear silhouetted against the white backdrop, acting as a focal point that actively draws viewers into the image.

Tip: Watch out for red ants!

If you are shooting around the grass here, watch out for red ants. If you stand still for too long, they will crawl up your legs and bite, so keep moving!

The post-war flats we saw above (Blocks 17 to 50) were built in the late 1940s to early 1950s after World War II. But they are not the oldest in the area—there are 20 blocks (Blocks 55 to 82) south of Moh Guan Terrace that were built in the 1930s to early 1940s before World War II. These pre-war flats were given conservation status by the Singapore government in 2003, which means that any works or adaptations done to the buildings since then must preserve the heritage and character of the place. 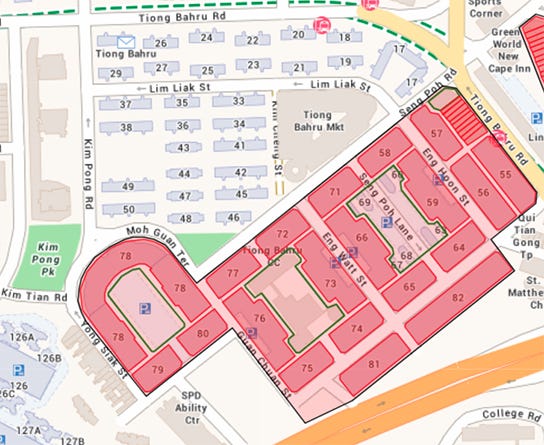 A mix of old and new

While many residents have lived in Tiong Bahru for decades, it is also a popular place to live and hang out in, especially among young professionals. There were once fears of gentrification: that Tiong Bahru would eventually lose its authenticity. In response, residents embarked on initiatives to maintain the balance between the old and new. As you walk along the streets, you can still see traditional family-run businesses alongside newer independent boutiques and modern cafes. 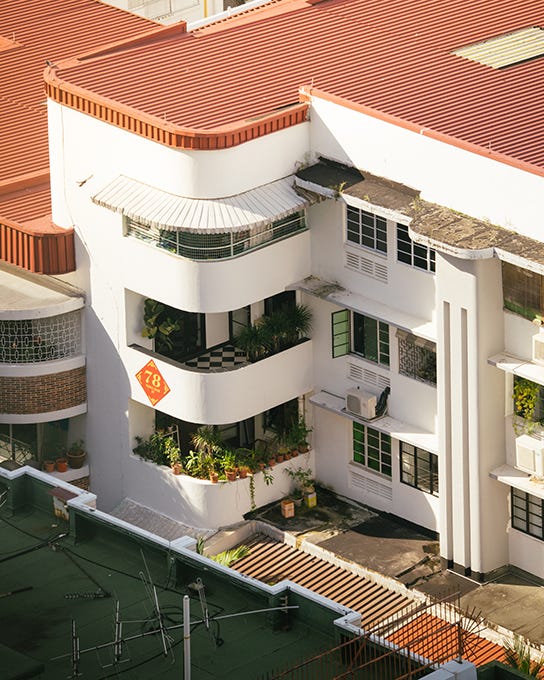 I’m always searching for interesting new perspectives from which to photograph and heading up into the stairwells and corridors of tall public housing developments always lends a surprise. This shot was taken from a tall neighbouring public housing block using a telephoto lens. Looking down from above gives a different perspective from the typical street view, and allows one to zoom into particular details.

Zoom in on details

Original architecture fixtures
What caught my attention here was some of the original architectural features such as the unique green-tinted glass windows, which were used to reduce solar heat gain. These fittings were imported from England and supplied by the famous Crittal Manufacturing company. Although many have been replaced over the years by more modern fittings, you might still spot some originals such as here!

Other unique design features
The pre-war buildings in Tiong Bahru are inspired by Streamline Moderne style, a type of Art Deco. During my travels, I have encountered many Art Deco buildings across Europe, but it was interesting to see here how design features were adapted for the tropical climate of Singapore. The corner apartments above show some of these, such as the naturally ventilated balconies designed to keep the indoors cool even without air-conditioning and the curved sunshades above the windows on the right-hand side. 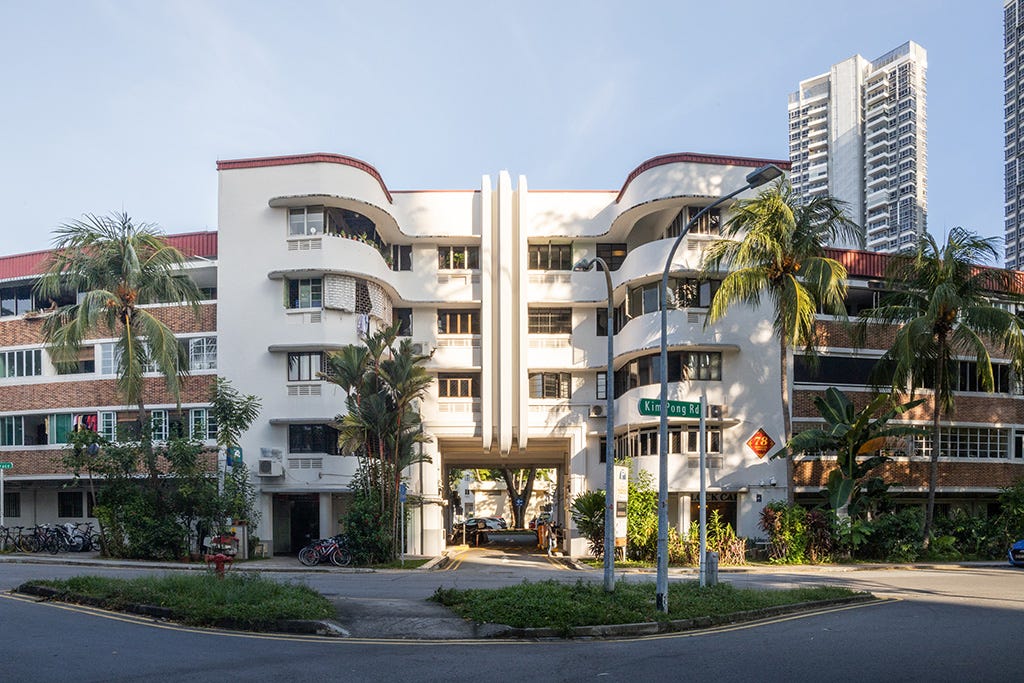 Canon EOS RP + EF24-70mm f/4L IS USM
Another view of the horseshoe block. The shadows of the block opposite it form a natural vignette that spotlights the Art Deco style decorative detail in the middle.

Try this: Play spot the details as you walk around

The Streamline Moderne style was inspired by the aerodynamic forms of vehicles in the 1920s and 1930s. Telltale signs of it are curved shapes, rounded corners, and long lines, as well as details like flat roofs and bands of windows. Can you spot them? What other interesting exterior details do you notice? What other types of architectural photography techniques can you use to draw attention to them? Do the modernist buildings in your country have them too?

This interesting booklet by Singapore’s Urban Redevelopment Authority tells us more about the unique traditional features found in the pre-war flats. 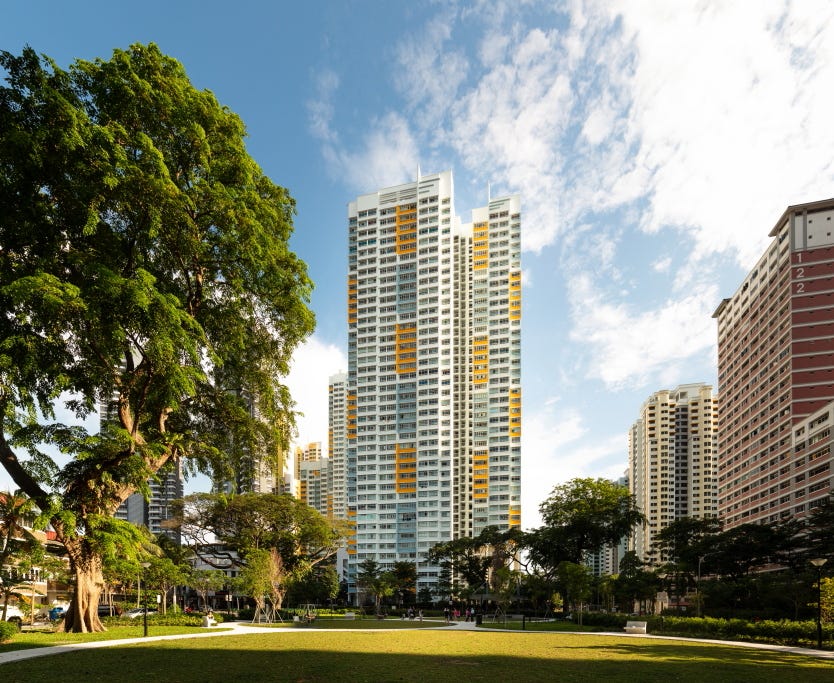 Much recent attention on Tiong Bahru focuses on the historical pre-war and post-war walk-up flats. But its charming mix of old and new also applies to architecture, and it is home to many newer high-rise public apartments, known colloquially as “HDB flats” after the government agency that built them. While they are more utilitarian in design than the blocks in the two older areas we saw above, they also reflect evolving trends in public housing over the decades.

Low side lighting to bring out dimensionality; use shadows to create a natural vignette

These blocks along Kim Tian Road are some of the tallest in the neighbourhood and are seen here from Kim Pong Park in the early evening. I chose to shoot in low side lighting so that the strong shadows add dimensionality to their forms. It is one type of lighting I enjoy shooting in! The shadows cast by the neighbouring blocks add a natural vignette, drawing emphasis to the blocks.

Tip: Use an ultra-wide-angle lens and correct converging verticals in post

For commercial architecture work, I use Canon tilt-shift lenses to maintain straight verticals. However, when shooting recreationally, I often use ultra-wide zoom angle lenses as I enjoy the speed and flexibility they offer, especially when shooting off tripod. When capturing taller buildings like these flats, I correct the converging verticals in post-production.

Other sights of Tiong Bahru 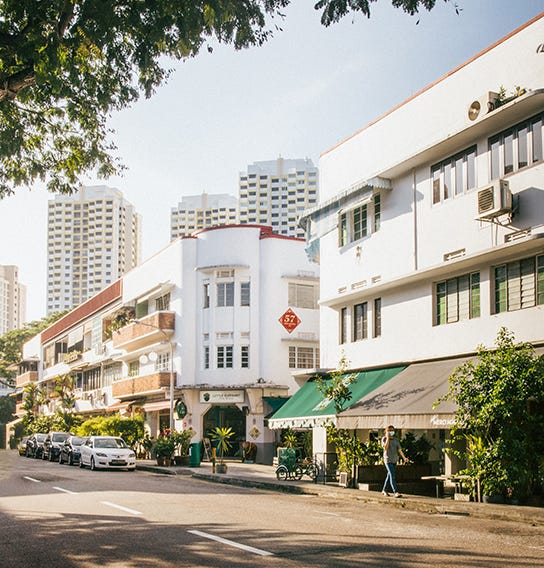 The pre-war blocks as seen from the street. A mix of modern and traditional businesses occupy the ground floor units, and the newer high-rise public housing apartments are visible in the background. 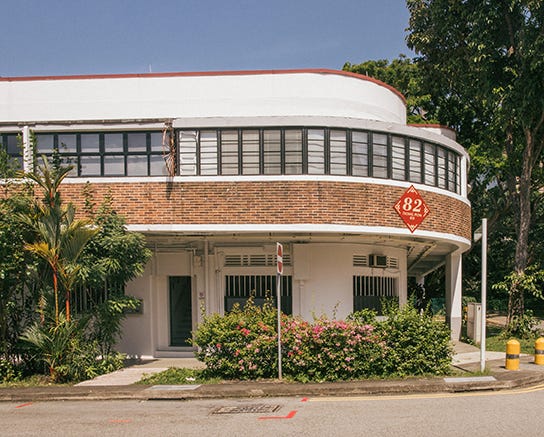 Blocks 81 and 82 along Tiong Poh Road are known as the “aeroplane flats” because they resemble the wings of an aeroplane when viewed from a distance. 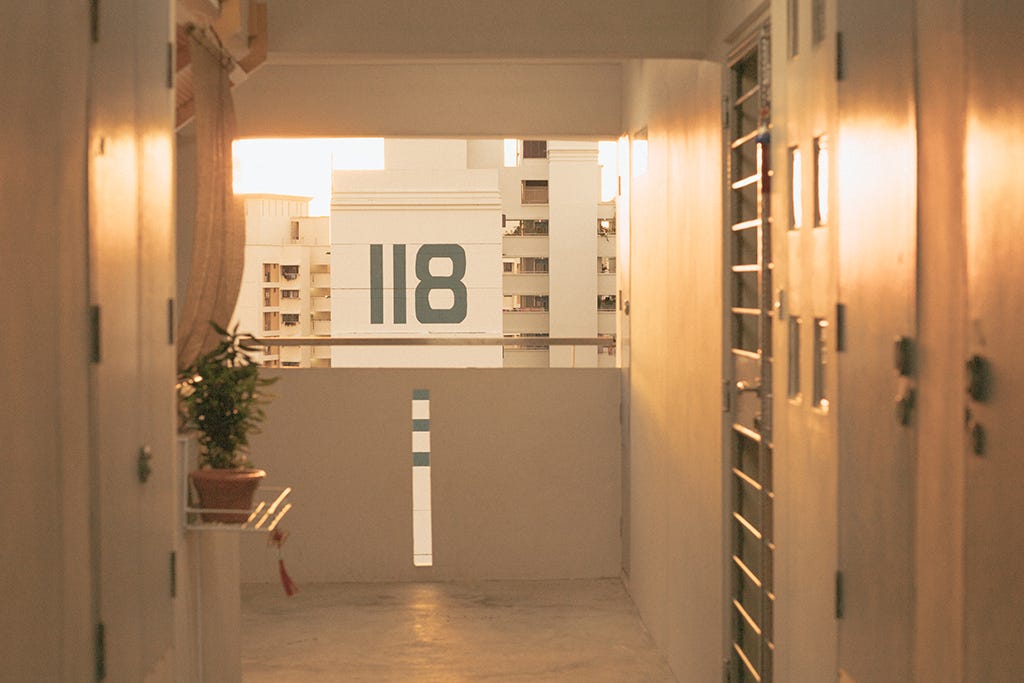 The common landings and corridors of HDB flats can give an interesting view. Feel free to explore (while respecting the residents' private spaces and right to privacy, of course). You might just meet friendly residents or fellow photographers checking out the same shooting spot!

What now: How else to enjoy Tiong Bahru?

1) Food
Be sure to check out Tiong Bahru Market, which has a large selection of local food for breakfast or lunch. Alternatively, you could also chill at one of the many cafes or traditional local coffee shops in the neighbourhood.

2) Explore the back alleys
There are many pedestrian alleys behind the blocks which offer intriguing architectural sights such as spiral staircase escapes.