Super telephoto lenses as long as 600mm and 800mm are often associated with wildlife and planes, but they can also offer new perspectives in one of the most unlikely places: the city. Bangkok-based travel and urban photographer Don Amatayakul (@donamtykl) shares how the RF600mm f/11 IS STM and RF800mm f/11 IS STM helped him see the world around him through new eyes. (Reported by: Don Amatayakul) 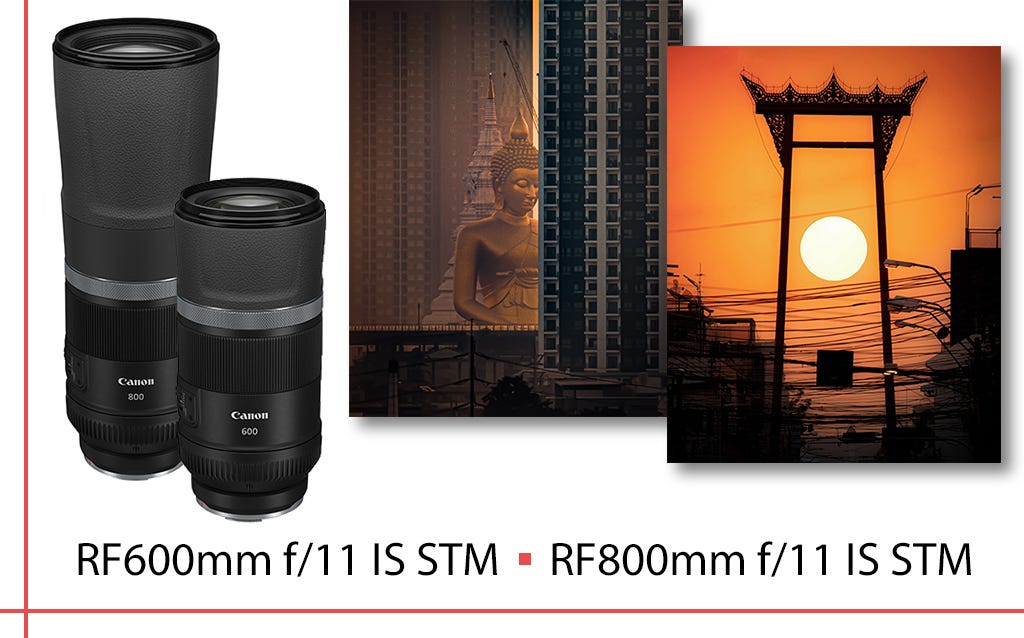 New perspectives, even in the same places

As a travel and urban photographer, I seek to share the beauty of places with people, and through that, change the way they see the things around themselves. And to present such different perspectives, I have an arsenal of lenses that covers different focal lengths, all the way from ultra-wide angle, to standard, to telephoto.

Before I bought these lenses, my longest lens was the EF70-300mm f/4-5.6 IS II USM. However, there were times where I felt that the compression and close-up effect it offered was not enough. I always wanted a super telephoto lens, but back then, the existing options were expensive, heavy, and not easy to carry around, so I put away the idea of owning one.

Then, Canon released the RF600mm f/11 IS STM and RF800mm f/11 IS STM, and I got the chance to try them out. At first, I was concerned about the fixed f/11 aperture as I thought it would severely impact my shots. But it wasn’t as much of a problem as I thought, and I came away so impressed that I ended up buying both. I have owned them for about a year now, and use them about 40% of the time. I use them mainly with the EOS RP and they perform really well. 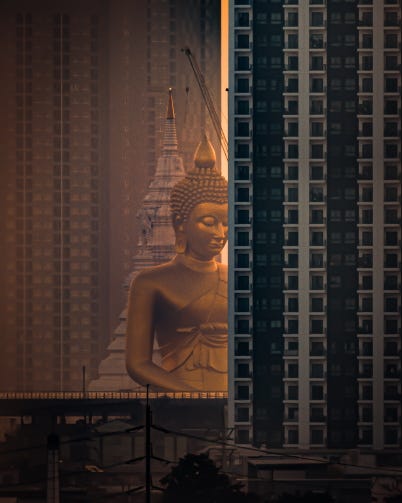 This meditating Buddha statue is 20 storeys high. Magnificent temples and structures are as much a part of Bangkok as modern architecture, and the compression effect at 600mm and 800mm, which makes elements in the background appear bigger, helps to juxtapose them side by side without making either look small in comparison. 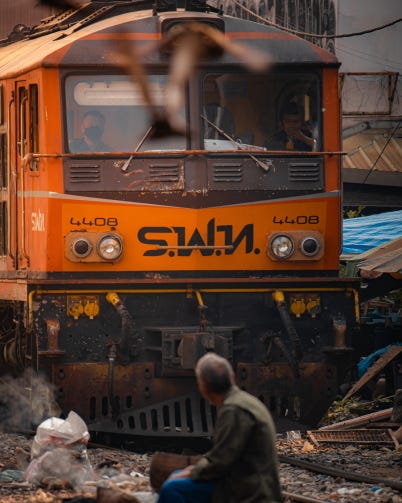 I found myself shooting more trains after I bought the RF600mm f/11 IS STM and RF800mm f/11 IS STM. A wider lens would let you capture the train, but with a super telephoto lens, you can see the people in and around the trains too, down to their facial expressions at each encounter. 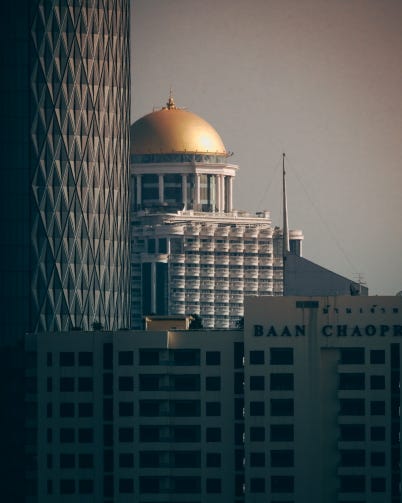 Urban textures. The magnification on super telephoto lenses offers a whole new point of view. I shoot more close-ups of buildings now that I have them.

Shooting scenes and sights of a city means lots of exploring, hence, I like to keep my backpack light so that I can shoot more comfortably and for longer durations. When I choose gear to buy, the size, weight, and portability are major considerations.

The RF600mm f/11 IS STM and RF800mm f/11 IS STM are half the size of their L versions, and in terms of weight, they weigh at least 70% less. They not only make a lightweight pairing with the EOS RP, they are also portable enough to throw into my bag and explore the city with. It’s nice to have options with you because you never know what you find, and when you will need them. 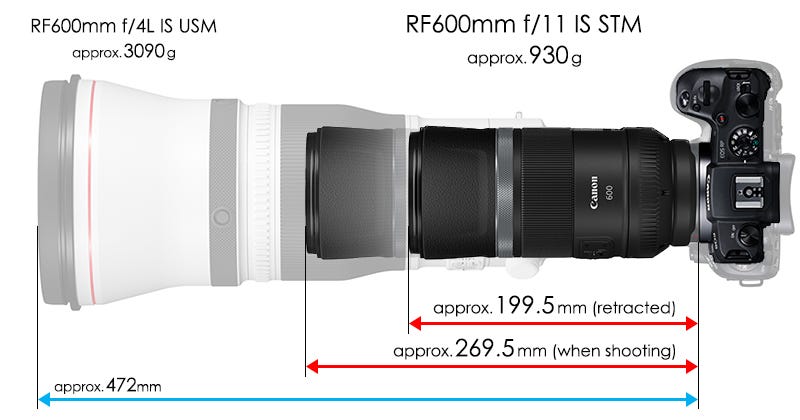 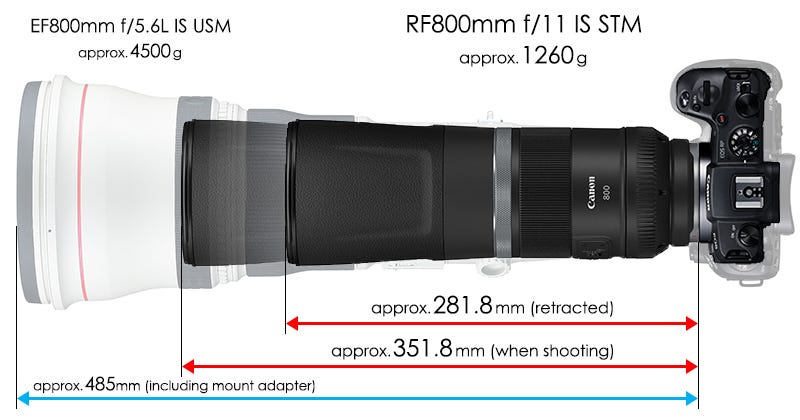 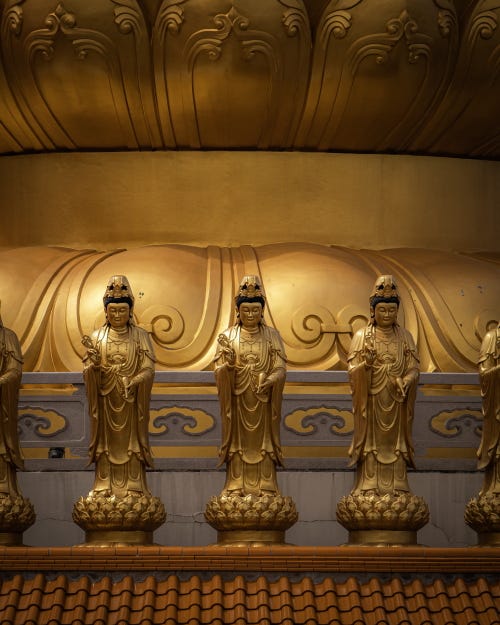 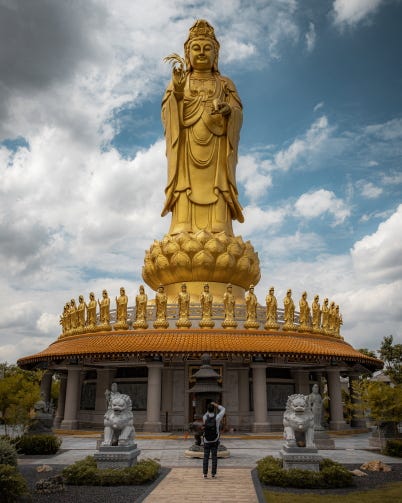 Bangkok is full of impressive temples and historical complexes with intricate architectural details, but getting close ups of them isn’t as simple as simply moving closer. The RF600mm f/11 IS STM allowed me to capture the smaller Guan Yin statues from the best angle.

The in-lens image stabilisation (up to 5 stops on the RF600mm f/11 IS STM; up to 4 stops on the RF800 f/11 IS STM) is another feature that makes the lenses very easy to use. This, together with the lightweight design, makes it easier to shoot handheld without using a tripod, even under low light conditions. 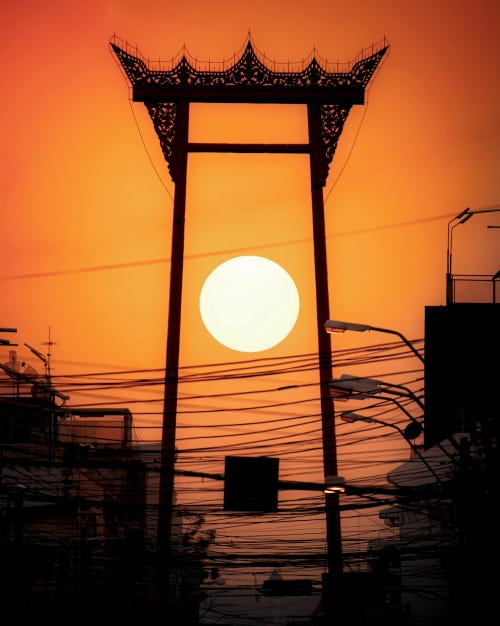 A handheld low angle shot of the Giant Swing in the evening. Because of the in-lens image stabilisation, the f/11 fixed aperture isn’t as much of an issue in low light even if you don’t want to use a high ISO speed. Shooting at 1/60 second on a non-stabilised telephoto lens would normally result in visible camera shake, but this image has no shake at all.

I think the control ring is one of the best features that Canon has ever introduced on a lens. It allows you to control one assigned exposure setting however you like simply with a twist of the ring, so you don’t end up missing precious moments going through the camera menu. 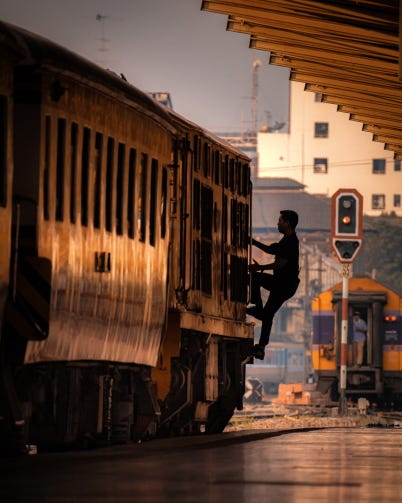 A train driver climbs into the driver’s cabin. Assigning the control ring to control the ISO speed helps you control the exposure quickly when you transit between scenes with different lighting conditions.

In summary: A closer look at scenes, a greater understanding of things

The things around us keep changing. It’s amazing how even the most familiar places are always different in some way every time you see them. In the five years since I first started photography, going out to shoot has improved my photography skills a lot, because seeing those changes helped me to pay more attention to the moments around me. I gained a better understanding of what moments I want to capture and show to people.

The magnification and closest focusing distance may take some getting used to, but it’s worth it

When viewed through a super telephoto lens like the RF600mm f/11 IS STM or RF800mm f/11 IS STM, the magnification opens your eyes to aspects of the scene that you never observed before.

The magnification and longer closest focusing distances (4.5 metres for the RF600mm f/11 IS STM, 6 metres for the RF800mm f/11 IS STM) might take a bit of getting used to. Be prepared to walk around to find the right angles and put more space between yourself and the subject. But once you get used to it, it is a lot of fun, and it will take your photography—and your understanding of a place—to new levels. 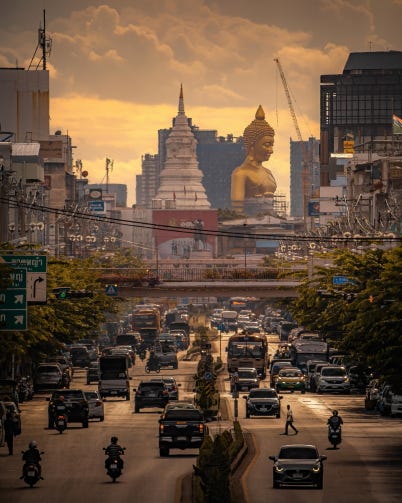 The giant Buddha of Wat Paknam is a picture of calm against the busy road. 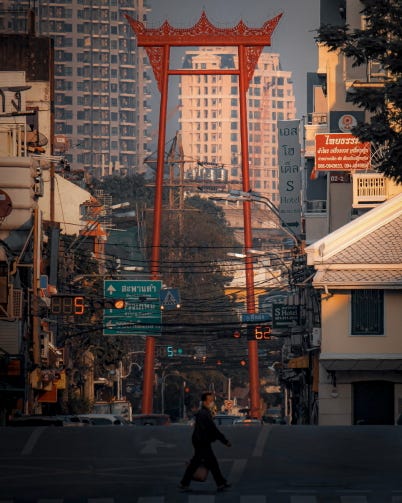 This was shot about 500m away from the Giant Swing, which is 27 metres tall. The compression effect of the lens brings out its scale in another way. 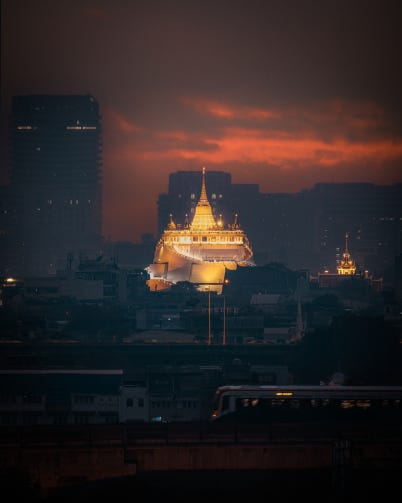 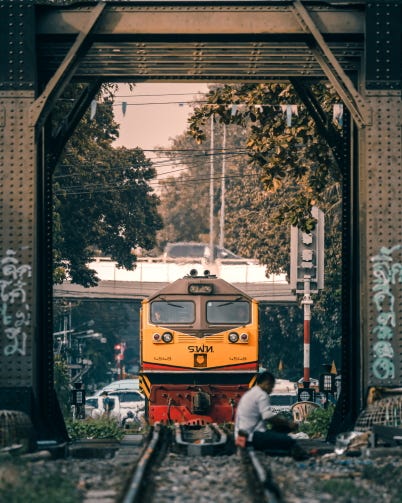 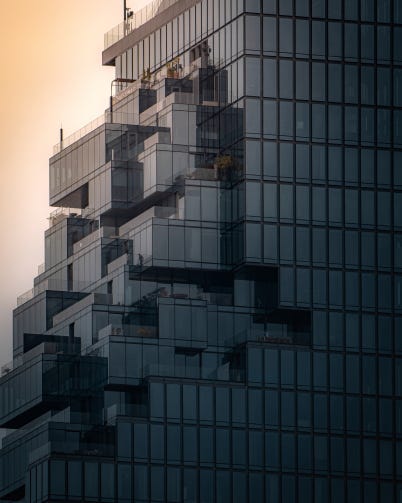 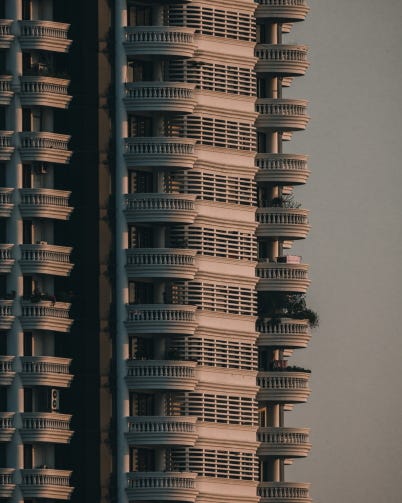 EOS RP/ RF800mm f/11 IS STM @ f/11, 1/500 sec, ISO 320
Shadows enhance the architectural details of these apartments. They may look identical and impersonal from far, but up close, you can see details of human life. 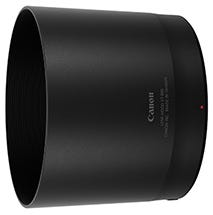 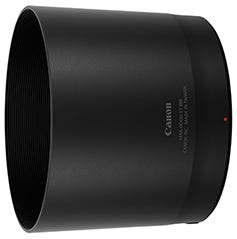